Warning: This is a very old story of mine. It’s in need of a lot of polishing which I will likely never get round to doing because there’s just no time. Read at your own peril. 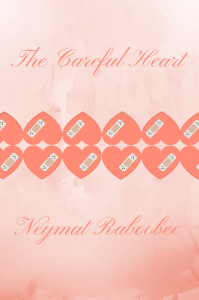 A guarded heart is a careful heart. An open heart is a dangerous heart.

This was Lina’s mantra. It had not always been this way. Once upon a time, Lina had loved freely. She hadn’t known any better. But, heartbreak had taught her to be careful with her treasures and now, she had a cracked, healing heart which she guarded with everything in her. When Lina was eighteen years old, she learnt a hard and painful lesson – that love can be given without being returned. Today, she was still a young woman, barely in her twenties but she was much more careful. She still wished to one day make nikaah and have children but she had resolved to be cautious. She was firm in her convictions that she would not allow anyone into her heart before they had proven themselves to be genuine.

Lina thought back to three years previously, remembering her first meeting with the handsome young man who had shattered her trust. Imraan had recently moved to their neighbourhood with his parents and Lina’s family had invited them for a meal in an attempt to be neighbourly. Lina had been captivated by the young man but had been far too shy to even look at him without blushing. Unbeknownst to her, Imraan had enjoyed her blushes and had been making a deliberate attempt to be extra charming that evening.

A few days later, Lina had bumped into Imraan on the way to do some shopping. They had made polite conversation which had ended in Imraan asking Lina for her cellphone number and receiving it. As time went by, Lina’s crush began to flower into affection. Her conversations with Imraan became longer and more intimate as time went by and soon, he was her confidante. She began to feel as though her day was not complete if she did not speak with him and rushed to answer the chime of her phone. Her friendships suffered. Worse, her salaah suffered.

In the back of Lina’s mind, guilt had been nagging her since the day she had given Imraan her cellphone number. She knew that it was wrong to speak with him privately but she hadn’t been able to resist. She had been ignoring her guilt but her conscience had grown louder and she could no longer ignore it. She didn’t know what to do and she felt far too ashamed to ask advice of her mother. She had alienated her friends when they kept expressing their reservations about her actions and she felt too ashamed to reach out to them now and ask for help. She had tried to speak to Imraan of her reservations but he had dodged her whenever she began to bring up the topic and, until then, she had simply let it slide. Lina considered stopping her acquaintance with Imraan. The thought was incredibly painful to her. He was the person she depended on most and she knew it would be very difficult to stop speaking to him. But, living as she had been was painful too. She had resisted this solution in the past because of how hard it would be but she knew now that there was no other choice. She sent Imraan one final message and then deleted his number from her phone to remove the temptation.

Lina had thought that after deleting Imraan’s number, the whole situation would come to an end. She was wrong. He had kept messaging her, saying that he missed her, that he needed to speak to her. It was difficult to resist the urge to answer these messages but somehow, she found the strength.

Then, one day a few weeks later, Lina’s mother sat her down. Mrs. Khan asked her daughter honestly if she had been dating Imraan. Lina didn’t know what to say. She simply sat there, frozen in shock. Mrs. Khan told her daughter that Imraan’s mother had spoken to her. She had told Mrs. Khan that Imraan was in love with Lina and he wished to marry her. Both Mrs. Khan and Mrs. Ally, Imraan’s mother, had been concerned about the suddenness of Imraan’s proposal. He had never before been interested in marriage and it seemed out of character for him to suddenly wish to propose.

Mrs. Khan assured Lina that she could speak openly without fear that her mother would judge her. She only wished to help. At this, Lina admitted that while she and Imraan had not been dating, they had been in contact with another and they had grown very close. She explained her decision to cut off all contact and that Imraan had been unhappy about it. Mrs. Khan counselled her daughter to make tauba for what she had done and thanked her for being brave enough to admit to her fault. Then, she asked Lina to think carefully about what she wished to do. If she wished to accept Imraan’s proposal, that was her choice. But, her mother cautioned, Lina needed to be cautious. She was still very young.

Lina had listened to her mother’s words of wisdom. But one thing was at the forefront of her mind – Imraan wished to marry her! It felt like a fairytale. She was too young to have thought seriously of marriage – she had only finished high school half a year ago. But, she had daydreamed much like any other young girl. Now, all those daydreams replayed in her mind with Imraan cast as her husband. Lina thought she would burst from happiness. She wanted to rush out to find her mother immediately and tell her parents she wanted to accept. She wanted to ask that they immediately go to the Allys and begin planning the wedding. All that stopped her was her mother’s last words, that she needed to be careful. Lina made the decision that she would tell her parents the next morning. She didn’t want them to think she was being hasty.

And so, the next day Lina gave her answer and the preparations started immediately. It was decided that the wedding would be in six months, enough time to get the preparations sorted out but not too far in the future. Lina’s happiness grew and grew. She felt as though she were walking on cloud nine. It is this happiness that allowed her to dismiss the little doubts that began to crop up when Imraan began to act differently. Previously, he had been devoted and attentive but suddenly, he became dismissive. Where he had once been sweet, he became callous. Most importantly, he was more often than not stressed. Lina began to suspect that he was unhappy and did not want to get married. When she voiced her fears, he would always soothe her, assuring her that nothing made him happier than the thought of their marriage.

But Lina was right. Two weeks before the nikaah was scheduled to take place, Imraan announced that he was not ready to get married. When Lina tried to suggest that they wait and marry later, he refused. He said that he wasn’t sure he ever wanted to get married, that he wanted to end things and finally, that he’d proposed only because she stopped answering his messages.

Lina was shattered. She felt betrayed and stupid. She cursed herself for ever having given Imraan her cellphone number. She lamented not having prayed before accepting the proposal and she felt awful about the amount of money that had been wasted on preparations. Slowly, though, Lina picked herself back up. She sought solace in Allah as she had not done since shortly after she’d met Imraan and eventually, she healed. She would always remember the lesson she had been taught but her wounds had healed to scars and she found a way to forgive herself.

Still, Lina kept the memories close. She did not vilify Imraan, recognizing that without forgiving him, she could not heal fully herself. She thanked Allah that she had not ended up in an unhappy marriage and made dua that Allah would guide her to the right man for her.

Today, these memories were particularly fresh in Lina’s mind as a proposal had come home just the previous day. After some thought, Lina had agreed to a meeting to see whether the two young people were compatible. She was scared – this was the first proposal she had entertained and she felt full of doubt. But, she had promised herself that she would not let her past ruin her future.

Lina found herself liking Ibrahim, found that she had much in common with him. They had similar outlooks on life. What she had liked most was that Ibrahim was perfectly respectful. He did not flirt or tease her and, her parents had liked him.

Despite this, even after Ibrahim and his family had expressed that he did wish to marry her and Lina’s family had agreed it was a good match, she was still hesitant. She asked for some time to consider and Ibrahim had agreed without a fuss. It was now a week later. Lina knew that she could not ask Ibrahim to wait forever. She had prayed constantly and she knew what her answer would be but there was still something which needed to be discussed. She had never spoken to Ibrahim about Imraan and he had never asked. Lina did not know whether this was because he was unaware of Imraan or because he was being kind but she could not say yes as she wished to without being sure that Ibrahim knew of her past. She knew that if Ibrahim were to find out later, it would be awful and she did not wish to start a relationship with secrets. She requested one last meeting with him to tell him about Imraan. She knew that if he still wished to marry her afterwards, she would be happy to marry him.

She met Ibrahim that evening. She had told him that what she wished to discuss was serious but he did not yet know the specifics. She told him everything. How the relationship started, what made it end, her doubts and reservations. At the end of it all, Ibrahim looked at her and told her that while he had not known all the details about Imraan, hearing them did not change his mind about her. Hearing this, tears of happiness began to roll down Lina’s cheeks and she finally accepted Ibrahim into her heart by accepting his proposal.

Yep. I actually submitted this to a competition way back when (spoiler alert, I didn’t win). It’s a shock to the system for me to read back old work because all I can see when I look at it is a giant pile of mistakes and bad writing choices.

But such is life. If we’re doing things right, we’re constantly improving and looking back on the past will inevitably bring about this wonderful amalgamation of nostalgia and complete embarrassment.

I’ve decided to embrace the mistakes – if nothing else, they’ll keep me humble.

12 thoughts on “Fiction: The Careful Heart”